The Palace in Winna Góra

The Home of J.H. Dąbrowski, the Protagonist of the Polish National Anthem

"Mazurek Dąbrowskiego" is 225 years old, and it has been the Polish national anthem for 95 years!

The General Dąbrowski Palace is a historic palace in the village of Winna Góra in Greater Poland (45 km/28 miles south-east of Poznań), built in 1910 for Henryk Mańkowski in the neoclassical Polish national style. Since 2021, the cultural institution of the Self-Government of the Wielkopolska Region has been located here, which carries out its mission around the figure of General Jan Henryk Dąbrowski and pioneers (male and female) of the so called "organic work". [1]

The History of the Old Palace

In the years 1760-70, a baroque palace was built in Winna Góra for Bishop Teodor Kazimierz Czartoryski. After the Second Partition of Poland (1793), the property came under the rule of Prussia and, in 1796, the Prussian authorities confiscated the residence and the surrounding areas. After the victory over Prussia, in 1807, Napoleon Bonaparte handed over the goods of Winna Góra, as compensation and gratification for his war merits, to General Jan Henryk Dąbrowski, of the Virgo Violata coat of arms (1755-1818). 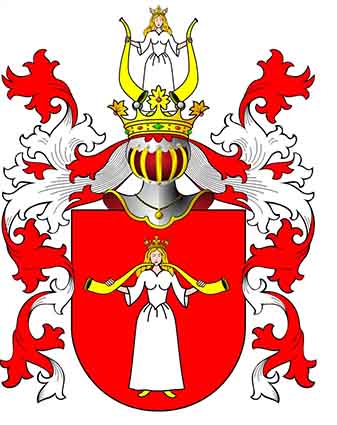 Coat of arms of the Dąbrowski family (Source: Wikipedia)

Gen. J.H. Dąbrowski, together with J. Wybicki, established the so-called Polish Legions in Italy, later fighting alongside Napoleon in his French campaigns. The general was a participant in the Kościuszko Uprising in 1794, the initiator of the Greater Poland Uprising in 1806, the commander-in-chief of the Polish army in 1813, a senator and voivode of the Kingdom of Poland in 1815, a cavalry general of the Polish Kingdom in 1815, and a Freemason. 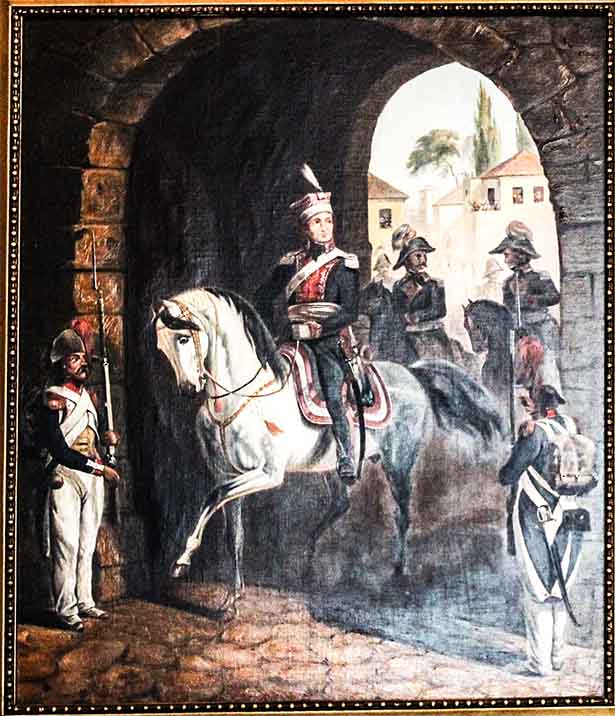 Józef Rufin Wybicki of the Rogala coat of arms (1747-1822) is a Polish politician and writer (political writings and literary works), also a Freemason, associate and friend of JH Dąbrowski, who participated in the Bar Confederation in 1768–1772, the Kościuszko Uprising and the Napoleonic Wars. He is remembered by history as the author of the text of the Song of the Polish Legions in Italy (July 1797) – later, the Polish National Anthem – the so-called "Dąbrowski Mazurka".

The Temple of Victory

After taking possession of the property in Winna Góra, J.H. Dąbrowski arranged the so-called Temple of Victory – a national sanctuary in which he assembled collections of maps, military items, patriotic memorabilia and documents, banners, images of Polish battles, and a large library. For many years, the site functioned as a center of Polish national thought. 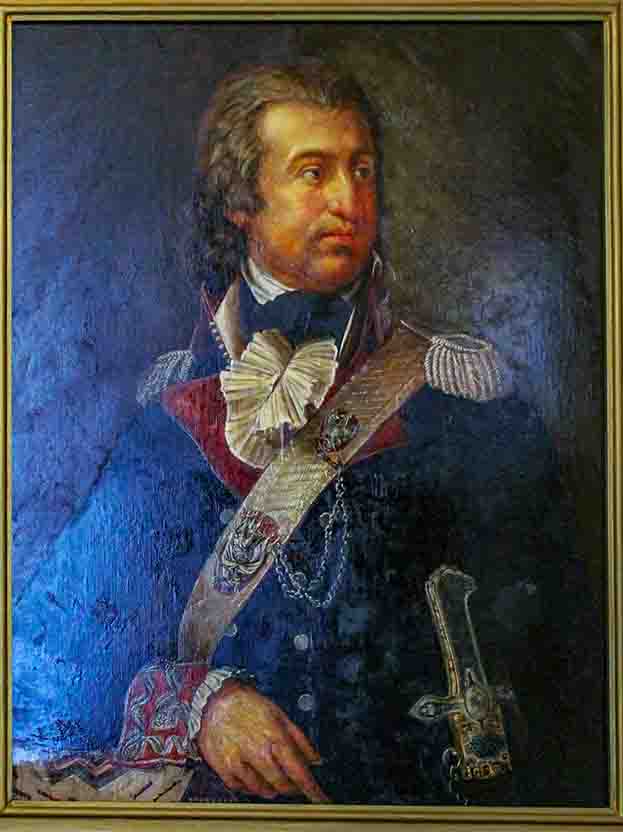 Henryk Mańkowski built a neoclassical palace in Winna Góra in 1910, designed by architect Stanisław Borecki (1855-1924) – a eulogist of the national style in architecture.

The Polish national style, also known as national or familiar, was to cultivate noble traditions, and those of independence, maintain a sense of national identity, and as a symbol of national culture, be directed against the influence of the partitioning powers. The manifestation of this style became the so-called Polish manor house — the archetype of Polish architecture. 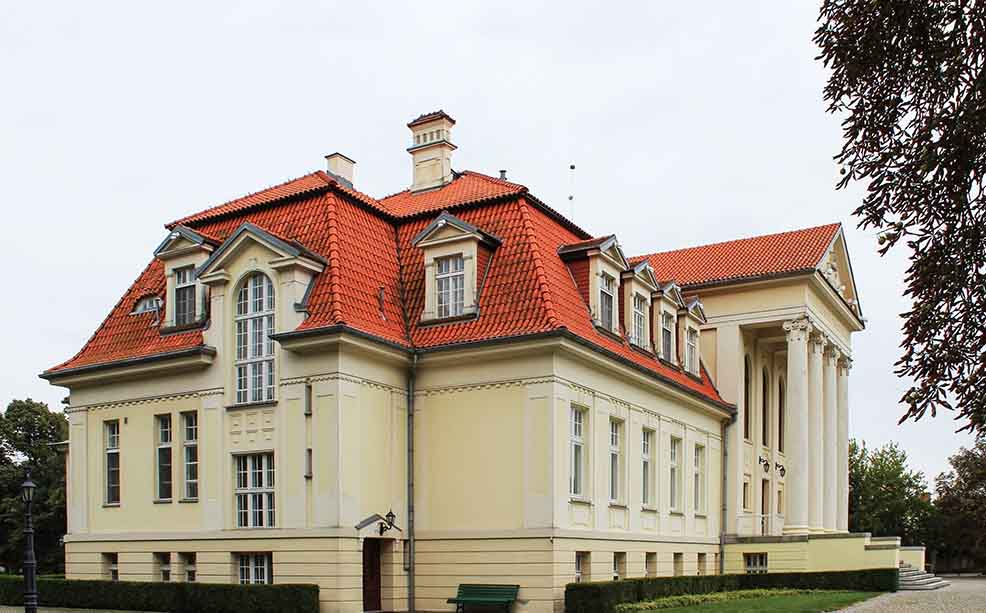 The canons of the Polish national style were formulated by Zygmunt Czartoryski in the work entitled "On the national style in rural construction" of 1896. With this work, he wanted to save "samples of the national style in construction, so that when — God willing — that the waters of the Flood would subside, the countrymen would have a place to get the patterns from." Over time, the columned portico (with a tympanum), which formed part of the façade of new mansions and palaces, or was added to older buildings, became the symbol of the Polish landowners' residence. The image was complemented by a symmetrical composition of the building and a "broken" Polish roof. [3]

"If God Is With Us, Who Is Against Us"

The Palace in Winna Góra captivates with the harmonious silhouette of the building, optimal proportions and symmetry, the monumentalism of the classicist silhouette and the richness of the architectural form. The two-story building was erected on a rectangular plan, and the upper level is located under the mansard roof with dormers.

In the façade, in the middle, there is a four-column portico of great order and a magnificent staircase leading to the main entrance. The triangular pediment above the portico is decorated with the coat of arms of the Mańkowski family — the Zaremba family and the sentence Si Deus nobiscum, quis contra nos? (If God is with us, who is against us?). In the side and garden elevations, there are projections, pseudo-window frames and pilasters, and a garden terrace. The building is surrounded by a well-kept park with a picturesque pond and huge old trees. [2]

The Spy in a Skirt

The the last years before the outbreak of World War II, the palace and the Winna Góra estate were managed by Henryk's son, Andrzej Franciszek Ksawery, Count. Mańkowski, of the Zaremba coat of arms (1910-2001), with his wife, Klementyna Maria Czarkowska-Golejewska, of the Awdaniec coat of arms (1910-2003). 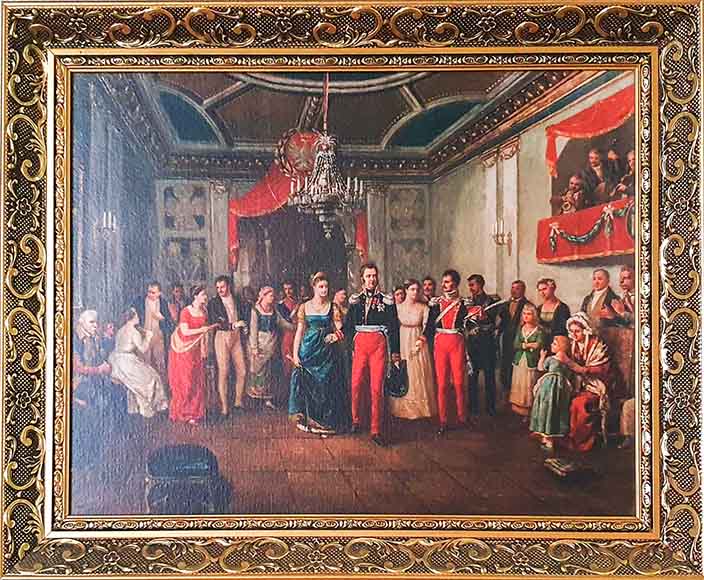 During the war, Klementyna's aristocratic origin, knowledge of foreign languages ​​and her Aryan beauty turned out to be excellent assets for intelligence work. Klementyna Mańkowska worked for the Polish underground intelligence organization "Muszkieterzy" (Musketeers). She obtained military information by cooperating with German officers, got specimen documents and official seals, and delivered intelligence reports to France and Great Britain. This Polish agent, undoubtedly gifted with a spying talent, was extremely effective in carrying out the dangerous missions entrusted to her. Thanks to her actions, many people escaped death. After the end of the war, Klementyna Mańkowska and her family remained in exile in Great Britain, France and, for almost twenty years, in the African Congo.

The Nazi occupiers (1939-45) appropriated the property in Winna Góra, and the Counts Mańkowski, the rightful owners, were expelled from the property. After the war, the property was confiscated by the communist state authorities and nationalized without any compensation to the Polish landowners.

"The Foundations of the Future"

In the series of history and herstory (women's historical politics), the palace hosted the exhibition "The Future at Its Basics" presenting the figures of male and female representatives of the organic work movement, and the "Organic Work Trail", with places, seats and institutions that had a significant impact on the success of the resurrection of the Republic of Poland. The mobile exhibition travels through the surrounding historical and cultural centers, on the Trail of Organic Work. [4]

Currently, the museum houses painting, graphic and drawing portraits of General Dąbrowski and his companions, military and memorabilia of the general (including a uniform), palace interiors with the furniture of the period. The most valuable exhibit of the museum in Winna Góra is a facsimile of the manuscript of the "Dąbrowski Mazurka" by Józef Wybicki. [5] 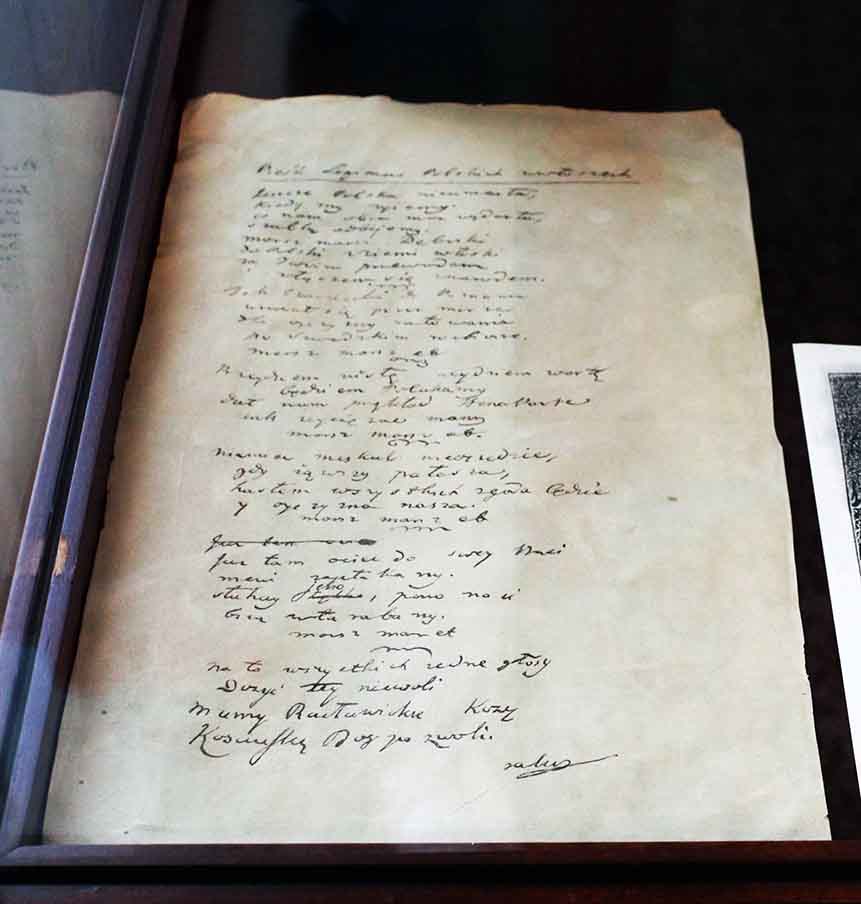 The Museum will undergo significant changes in the near future. As Marek Roman, director of the institution said: “On the first floor there will be an exhibit connected with the general as a man, husband, father, collector, and a veteran, who settled in Winna Góra. On the main floor, that is, on the ground floor, we will present Dąbrowski as a soldier, creator of the Legions, the hero of the anthem, and finally, as a general”. [6]

The costs of modernizing the palace, creating an interesting exhibition there, and maintaining the institution will be considerable, due to the large-scale project carried out with unprecedented momentum. Far-reaching undertakings with a wide range of exhibits, educational and cultural proposals require large financial outlays, in which all Poles, in the homeland and abroad, can participate.

The owners of the palace in Winna Góra, the descendants of General Jan Henryk Dąbrowski, were faithful to the motto "God, Honor, Fatherland". This motto was derived from the slogan established in 1802 by Napoleon Bonaparte and placed on the order of the Legion of Honor: Honneur et Patrie (Honor and Fatherland). This moral and spiritual triad of the Republic of Poland was placed on the banners of the Polish Army twice (in 1943, and in 1993), where it can still be found today.

In the last two years, I have visited the palace in Winna Góra twice. This beautiful historic building fascinates and ignites the imagination. After all, it is a silent witness to the history of our homeland and the bravery, the will to fight, and the sacrifice of her best Sons and Daughters. 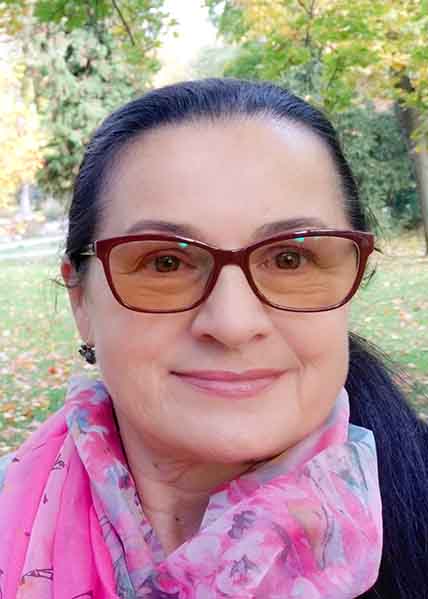 
Graduate of the University of Mikołaj Kopernik in Toruń, MA studies - physics, postgraduate studies - mathematics, computer science, doctoral studies - education technology. A long-term teacher at all stages of education (also an academic teacher). Author of the blog www.CzytamPoPolsku.pl with reviews of patriotic literature and reports on journeys along the routes of Polish mansions, palaces and castles. A lover and collector of books written "to cheer up hearts" and Tatra literature (she has been traveling to the Tatra Mountains since forever and constantly re-discovers them). Member of the Board of the University for the Active in Ciechocinek, Kuyavian-Pomeranian province. 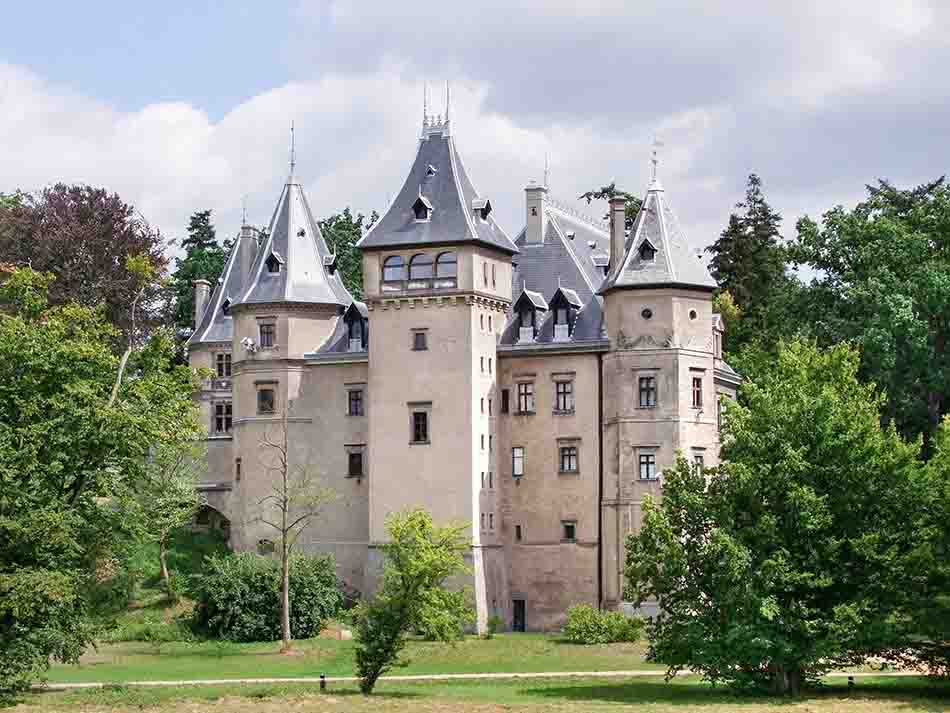 Gołuchów Castle is an early Renaissance, multi-story brick castle, with towers in each corner, built in 1550-1560 on a square plan for Rafał Leszczyński.