Cardinal Stefan Wyszyński - the Primate of the Millenium

Christianity and Catholicism are inseparably connected with the history of the Polish nation. The faith and Christian values ​​contained in the Decalogue accompanied Poles in their moments of glory and helped them through the most difficult moments of threat to their national existence. The Polish Church and its leaders played a great role in this. In the pantheon of outstanding leaders of the Polish Catholic Church, a suitable place should be reserved, next to St. Wojciech, for: St. Stanisław, Bishop and Martyr admonishing King Bolesław the Bold (11th century) to obey the moral laws in governing the country, Archbishop Jakub Świnka (13th century) striving to unite the state after the division into districts and supporting the Polish language in the church, enlightenment monks, priests and social workers work at the grassroots level from Wielkopolska, Fr. Skorupko who died in the Battle of Warsaw (August 14-16, 1920), Father Maksymilian Maria Kolbe - martyr from the concentration camp in Auschwitz, restoring our faith in humanity. This group of great Polish clergymen is closed by two great figures of our times - the Primate of the Millennium - Cardinal Stefan Wyszyński, and Pope John Paul II. 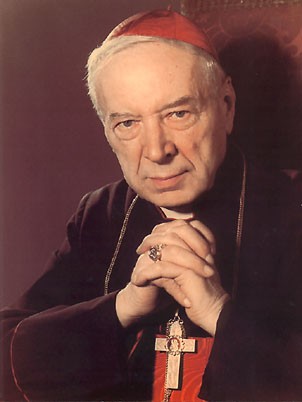 On September 12, 2021, the canonization of the Polish Cardinal Stefan Wyszyński will take place. On this occasion, it is worth at least briefly showing the profile and merits, both for Poland and the Church, of this outstanding clergyman and patriot.

He was born on August 3, 1901 in Zuzela on the border of Mazovia and Podlasie, then still within the Russian partition, as the second child of the large family of the organist of the local church, Stanisław and Julianna Wyszyński. The First World War threw this family to new and different places, which is why the future primate was educated in a gymnasium in Warsaw, in a private commercial school in Łomża, in a high school and in the Seminary in Włocławek. He was ordained a priest in 1924. He continued his studies at the Catholic University of Lublin and completed them with a doctorate in canon law.

From the beginning of his pastoral work, he actively participated in public life. He ran a Christian workers' university and social and educational activities in Christian trade unions. He was the first chaplain and activist of the Labor Party established in 1937. Between 1931 and 1939, he published 106 publications, most of them on Catholic social matters, the problems of the economic crisis, unemployment, and social justice.

In June 1942 he became the chaplain of the Institute for the Blind in Laski near Warsaw, founded by sister Elzbieta Róża Czacka. During the Warsaw Uprising he was a chaplain of the Home Army under the pseudonym "Radwan III".

After the war, in 1946, as the bishop of Lublin, he became the Grand Chancellor of the Catholic University of Lublin, where he lectured at the Faculty of Law and Economic and Social Sciences.

On November 12, 1948, Pope Pius XII appointed him Metropolitan Archbishop of Gniezno and Warsaw, and thus the Primate of Poland. "Primate" means the first, the leader responsible for subordinates. The times of Primate Wyszyński were special. It was then that the Soviet communist regime began its influence, one of the goals of which was to eliminate the church from social life and, as a result, make Poland a secular state. He felt the harassment of the communist state authorities when he was under surveillance on his way to ingress to Gniezno on February 2, 1949. In such a situation, the Primate chose a new strategy of conduct. He was the first hierarch in the history of the Catholic Church who decided to make deals with a country ruled by communists. He hoped that thanks to this legal and political act, there would be some formal grounds for defense in such a situation.

On July 6, 1949, on his initiative, systematic talks with the government began as part of the so-called Mixed Committee. As a result of the work of this commission, the 1950 State-Church Agreement was signed, which was notoriously violated by the government.

On May 8, 1953, at the Polish Episcopal Conference, on the initiative of Primate Wyszyński, the content of a letter to the government was edited, which went down in history under the name Non possumus (we cannot). The letter expressed firm opposition to the flagrant breach by the government of the previously concluded agreements.

From that time, for over thirty-five years, in the period from May 5, 1946 to the funeral ceremony on May 31, 1981, the Primate was under the constant observation of security service officers. For many years he remained in isolation in Rychwałd, Stoczek Klasztorny, Prudnik, and in Komańcza.

During his stay in Komańcza in 1956, referring to the 300th anniversary of vows made by King Jan Kazimierz, who, after defeating the Swedes, chose Mary-Lady of Jasna Góra as the patroness of Poland, Primate Cardinal Stefan Wyszyński decided to renew the vows made in Lviv and wrote a new text of the Jasna Góra vows of the Polish nation.

On August 26, 1956, at Jasna Góra, after a solemn mass attended by about a million pilgrims, Bishop Michał Klepacz, who at that time was the president of the Polish Episcopate, read the text of the oath. It began with the words to the Mother of God:

Great God - Mother of Man! Mother of God, praised Mary! Queen of the world and Poland, our Queen!

Then followed the words of the vow:

Here we, children of the Polish nation and your children, the blood of the blood of our Ancestors (...) bring to Your feet the centuries of our faithfulness to God and the Church of Christ.

The words of the promise continued. Some of them were:

During the October political crisis in 1956, Cardinal Stefan Wyszyński was released from internment and returned to Warsaw on October 28. December 8, 1956 led to the conclusion of a new, beneficial for the Church, so-called Minor Agreement with the authorities, under which, among others, religious education was restored in schools, the decree on filling church posts about the recommendation of state authorities was repealed, and bishops were allowed to return to the western and northern territories.

In the years 1957–1966, under the leadership of the Primate, the celebrations of the Millennium of Poland's Baptism were held, preceded, on his initiative, by the nine-year Great Millennium Novena. During a sermon at the Corpus Christi procession in Warsaw on June 20, 1957, he announced the pilgrimage of a copy of the miraculous painting of Our Lady of Częstochowa through all parishes in Poland. He actively participated in all important events concerning the Church in the world, including the work of the Extraordinary Synods of Bishops in Rome in 1969, 1971 and 1974. He participated in three conclaves and was even eligible to be elected as pope. A dozen or so universities awarded him the title of Doctor Honoris Causa (honorary doctorate). 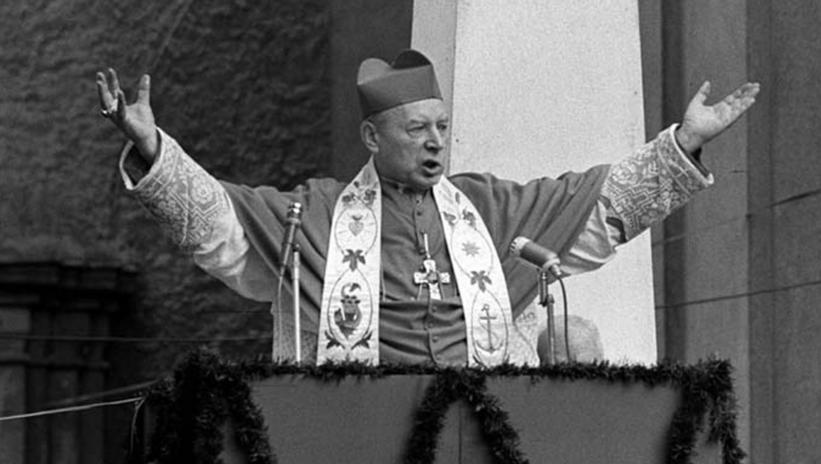 In 1965, he was one of the initiators of the address of the Polish bishops to the German bishops. He supported the activities of parliament deputies from Catholic circles. He consulted many important decisions with them.

In 1972, thanks to his many years of efforts, the Vatican finally recognized Poland's western borders.

Primate Stefan Wyszyński was nominated for the Nobel Peace Prize twice, in 1977 and 1978.

Through all his activities, he prepared the ground for the election of the Polish Pope, Cardinal Karol Wojtyła, with whom he worked closely.

During the Polish August 1980, out of concern for peace and the good of the nation, he called for prudence and responsibility. On August 26, 1980, he delivered a homily at Jasna Góra Monastery in which he presented the position of the Church in relation to the emerging Solidarity, saying, among others:

I believe that sometimes a little needs to be demanded, as long as there is order in Poland. The more that the demands may be right and they are usually right, but they can never be fulfilled right away, today. Their implementation must be divided into installments. So we have to talk: in the first wave we will make the demands that are essential, in the second wave we will make the next ones. This is the law of everyday life.

A day later (August 27), a communiqué of the Main Council of the Polish Episcopate was published, stating that the condition of social peace is respect for the inalienable rights of the nation, including the right to associate in trade unions. Moreover, the communication alsso stated:

The agreements reached, backed by appropriate guarantees, should end the strikes so that the normal functioning of the national economy and social life in peace would be possible. Agreements should be respected by both parties according to the principle: Pacta sunt servanda (the agreement was delivered).

On May 28, 1981, due to cancer of the abdominal cavity, Cardinal Stefan Wyszyński died. Funeral ceremonies gathered church and state dignitaries from all over the world, crowds of believers and crowds of those who respected him for his wisdom and patriotism. Everyone came to say goodbye to him and pay tribute to the great Pole, shepherd of the Church and a statesman.

On September 12, 2021 in the Temple of Divine Providence in Warsaw, the beatification of Cardinal Stefan Wyszyński and mother Elzbieta Róża Czacka - founder of the Institute for the blind in Laski near Warsaw - will take place. Merit shall be rewarded!

Share
Tweet   Email   Share
The project is partly financed by the Chancellery of the Prime Minister as part of the "Polonia and Poles Abroad 2021" competition. The publication only expresses the views of the author(s) and cannot be equated with the official position of the Chancellery of the Prime Minister.
Martial Law 1981
The Jaruzelski-against-Poland War
Andrzej (Andrew) Woźniewicz 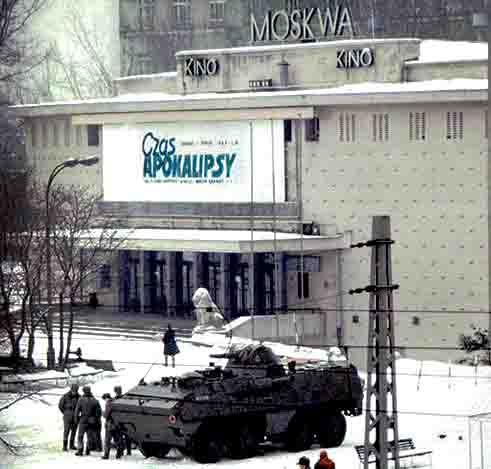 In a few days, we are celebrating the 40th anniversary of the introduction of the so-called Martial Law — the unconstitutional and (even according to the law of the time) illegal military coup, which was supposed to put an end to the operation of "Solidarity" — a political and social freedom movement under the aegis of an independent trade union. The purpose of the imposition of martial law was to restore the existing social system and thus consolidate the pro-Soviet, communist power in Poland for an indefinite period.