Polish Churches in the United States

From the mid-nineteenth century, Polish emigration to America intensified. The emigrants were fleeing Prussian oppression or were looking for a better life. Most often they chose places where their compatriots had already been established. Everyone focused around the church, creating a community where they had support and felt safer. As the number of emigrants grew, there was a natural need to create new parish groups, build new churches and schools that gave the children the basis of education. These reasons and goals accompanied the building of a community around the Church of the first Polish saint, St. Adalbert in Milwaukee. 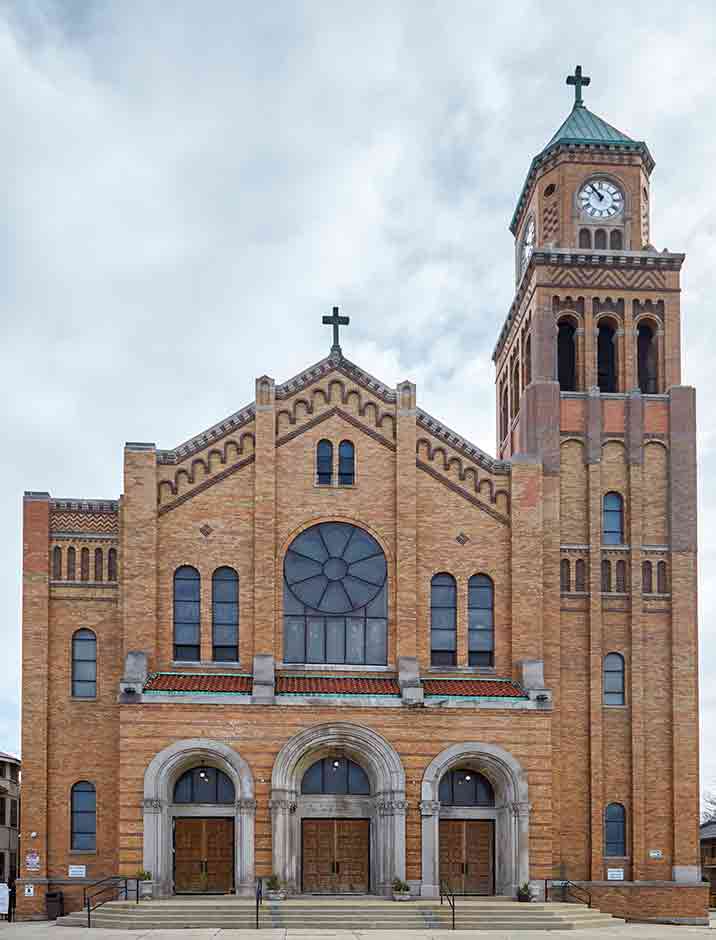 On the 26th January 1908, a group of men and women met with the intention of founding a new Polish parish in the neighborhoods further west, on Milwaukee’s South side. The group was sponsored by Rev. Hyacinth Gulski of St. Hyacinth parish, who provided the land, seed monies, and moral support. The petition for the new parish was approved by Milwaukee Archbishop Sebastian Messmer and the project moved forward. The group chose to name the new congregation after St. Adalbert, one of Poland’s most beloved saints. The parish was incorporated just four days later and five lots were purchased on the corner of Becher and S 19th Street on June 23, 1908 for $13,000. The site chosen was described as being in the middle of a swamp with small streams flowing into the river, but this did not discourage the builders.

The new parish was able to register 550 families many of whom had children at the overcrowded St. Vincent de Paul parish school. St. Adalbert’s parish would also have a parochial school, which would provide some relief to the educational congestion. The cornerstone was laid on August 30, 1908 and blessed by Father Michael Domachowski, who would serve as the first parish priest. The combined church and school building was completed on February 28, 1909 and had eight classrooms as well as living quarters for the teaching Sisters of Notre Dame. The school opened with six School Sisters of Notre Dame and 411 students. On September 18, 1909 Father Domachowski was transferred to St. Vincent de Paul Parish and was replaced by Father Wacław (Wenceslaus) Kruszka.

The Kruszka brothers, through Kuryer Polski, became defenders of Polish interests in the Catholic Church, and Wenceslas became one of the most influential and controversial Polish priests in Milwaukee. 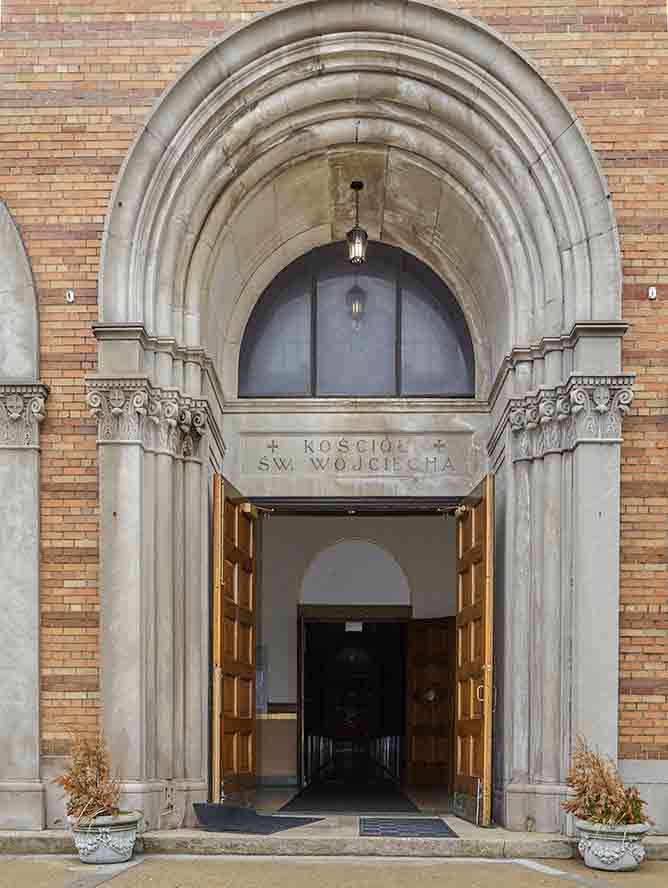 Father Kruszka brought love and true passion to his new parish. Under his guidance, in 1911 a home was constructed for the parish Sisters and in 1913 a wing of six new classrooms was added to the school building. During the St. Josaphat financial meltdown, the ever rebellious Father Kruszka backed the decision of the lay trustees of St. Adalbert not to pay the assessment from the Archdiocese to relieve that debt. In another reformist move, Father Krusza also introduced full financial disclosure to the parish, which allowed members to see exactly how their funds were being disbursed. This had been one of the key demands of Polish dissidents within the Milwaukee Catholic church following the economic debacle in the construction of St. Josaphat.

The school was expanded several times. In the years 1913-1917, it educated 1030 students. St. Adalbert School would reach its peak enrollment in 1924, when 1,585 pupils were taught by twenty three sisters. A simple bell of steel hanging from an open frame in the yard of the parish yard served to call the parishioners to worship. It required repair several times during its many years of service and was finally retired in 1941. 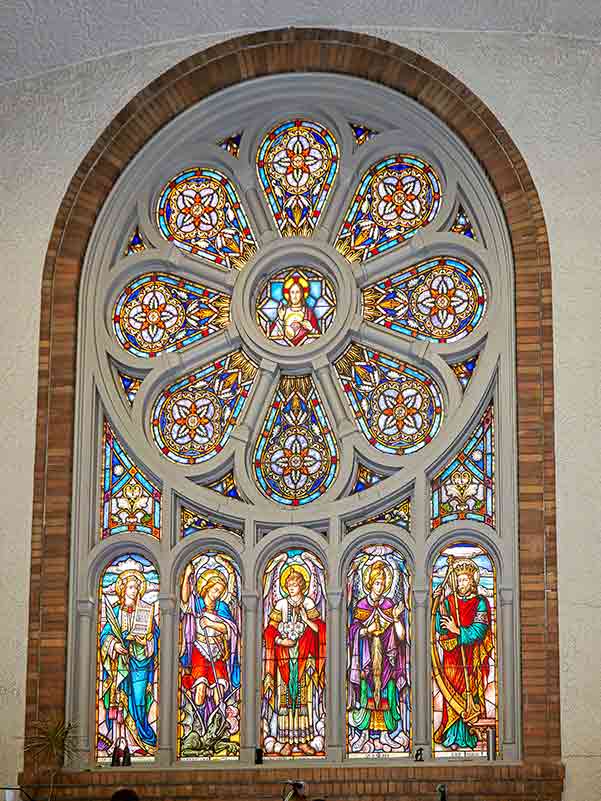 Due to growing attendance and the popularity of the pastor, in 1930 the parish decided to construct a new church building at a cost of $252,000 on land donated by St. Hyacinth’s parish. The soft, marshy soil again proved to be an obstacle, but was overcome by the use of large pilings. The construction firm of Mikolajewski was awarded the construction contract and represents the city’s only example of Polish-inspired Romanesque Revival architecture. The tall tower on the northwest corner of the church was built to resemble the cathedral in Krakow, Poland. The copper clad belfry holds four bells with the names of St. Adalbert, Jesus, Mary, and the Angel inscribed in them. The church became well known throughout the Milwaukee area for its beautiful stained glass windows. The belfry tower reaches 132 feet into the air. On April 23, 1931 the 1200 seat church was completed and blessed. By now 25 teachers were living in the convent. 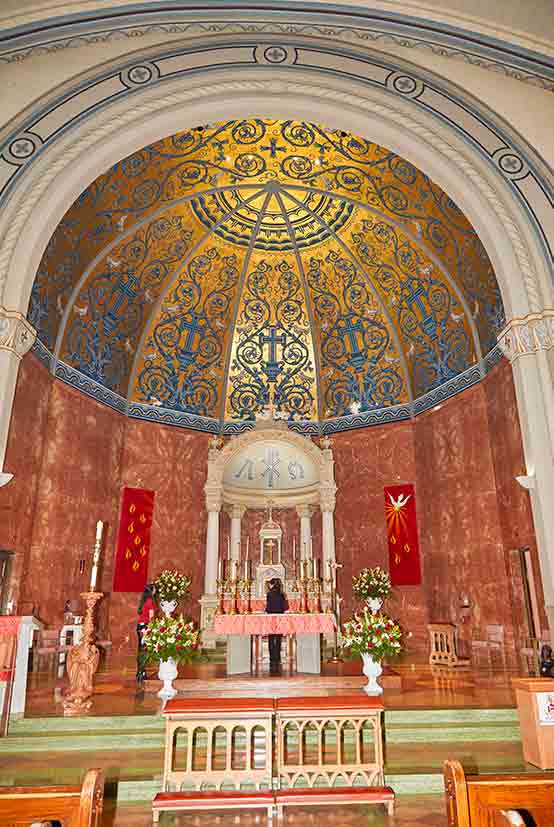 Father Kruska was awarded the Order of Polonia Restituta by the Polish government for his passionate work on the behalf of Poles in America. While the parish was still in deep mourning, Father Kruszka was replaced by Father Clemens Zych. Father Zych installed central heating as well as four new bells into the tower. An electric clock was installed and in 1943, the church was redecorated. Additional stained glass windows were installed to complement the originals.

Unfortunately, church attendance started to decline in the 1940s, and enrollment at the parish school dropped to 567 pupils, a significant loss from the peak in the 1920s. Young families with children left the parish, seeking newer homes further west and south of the neighborhood. Even so, the interior of the church was redecorated in 1958 and seating expanded to 832 in anticipation for its Golden Jubilee the following year. The altar was simplified and beautified along the lines of St. Clement’s Church in Rome. 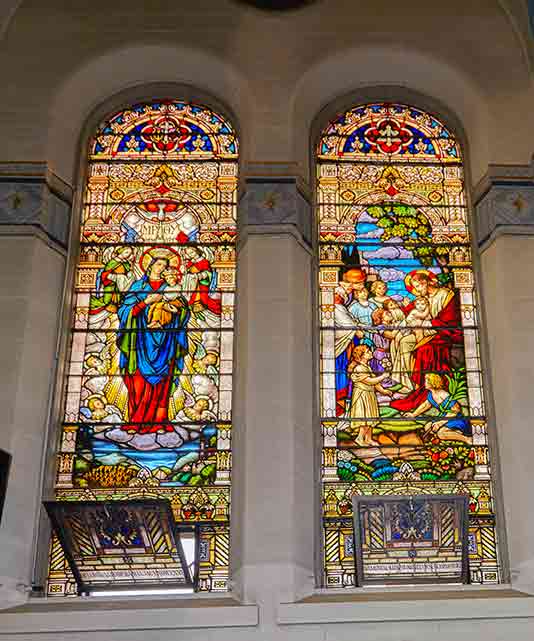 Between 1967 -77 some significant improvements were made to the church including repainting the walls, removing the communion rail and positioning the altar closer to the Congregation. In the 1980s, it became evident that church attendance was dwindling, talks were held with St. Hyacinth and Ss. Cyril & Methodius to seek some collaboration between the parishes.

In 1986, $42,525 was spent to restore its stained glass windows, which are still some of the most beautiful in the city. The school still had 201 registered students. The following year, on June 11, seven hundred past and present members gathered to pay tribute to Father Kruska. Milwaukee Archbishop Weakland and the President of the Polish American Congress were among the attendees. 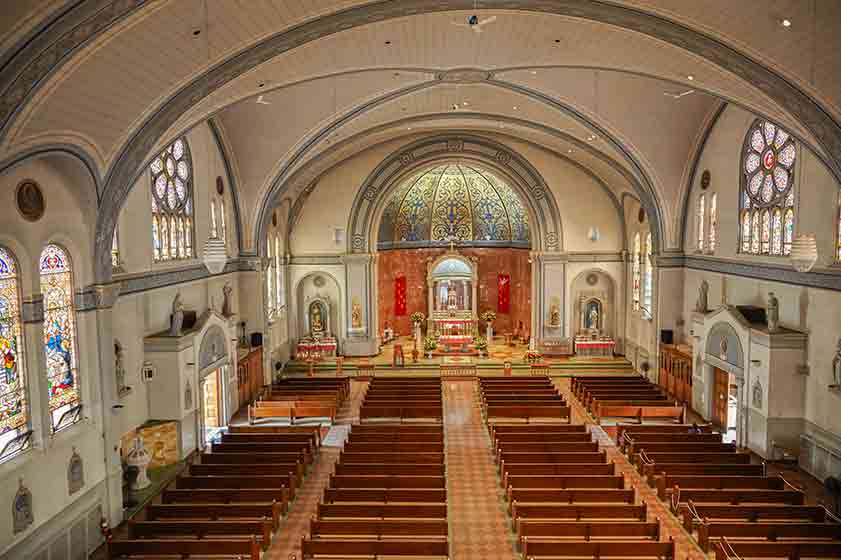 St. Adalbert’s now also faces the challenge of most of the Polish churches on the south side, declining attendance in a changing neighborhood. It now offers services in Spanish to reflect demographic changes in the community.

The history of the Church of St. Adalbert in Milwaukee is part of the history of the Polish American community. The life of many outstanding Poles, and of the simple but very patriotic Polish emigrants who support their activities, is connected with the community of this church. This story deserves to be saved from oblivion. 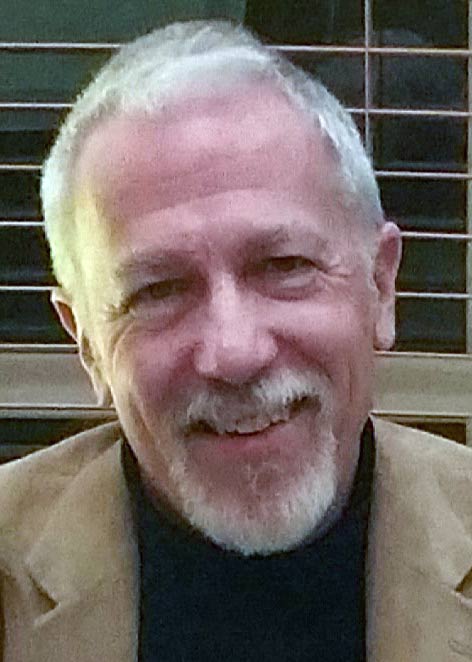 
Born in Milwaukee, Wisconsin and grew up in the suburb of Wauwatosa. After graduating from Indiana University with a degree in Telecommunications, he embarked on a 40 year career in International Sales.

Share
Tweet   Email   Share
The project is partly financed by the Chancellery of the Prime Minister as part of the "Polonia and Poles Abroad 2021" competition. The publication only expresses the views of the author(s) and cannot be equated with the official position of the Chancellery of the Prime Minister.
St. Hedwig (Św. Jadwiga) Church - 1702 N Humboldt Ave.
Polish Churches in Milwaukee
John Smallshaw

A small wooden church was finally erected on the corner of Brady and Humboldt in 1871 at the cost of $11,000. The Milwaukee Sentinel at the time reported that these St. Hedwig families were among the poorest of the poor, with the men being engaged in sewer construction and public works. 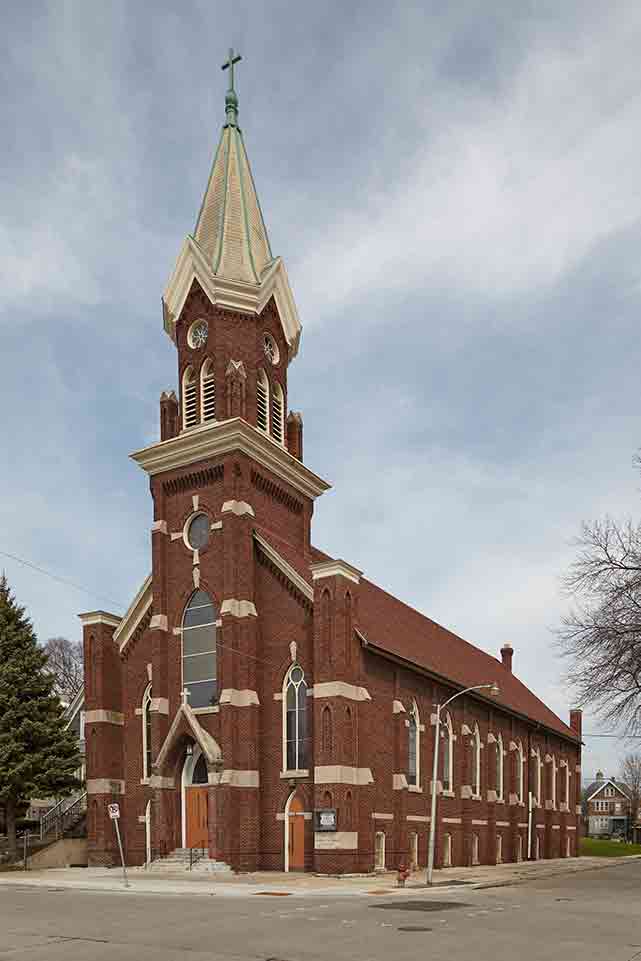 The Polish National Church was founded in 1897 in Pennsylvania by Reverend Francis Hodur. Father Hodur was born in Żarki in 1866, in the Austrian dominated sector of Poland. In 1893, he emigrated to the United States and was ordained into the priesthood at Holy Trinity Roman Catholic Parish in Scranton, PA. A political activist, Father Hodur undertook a mission to Rome to secure a greater voice for Poles in the American Church. Unrest among the Polish parishes was common during this period and rioting broke out in his parish in a dispute over the ownership of church property, use of the Polish language, and selection of local priests. 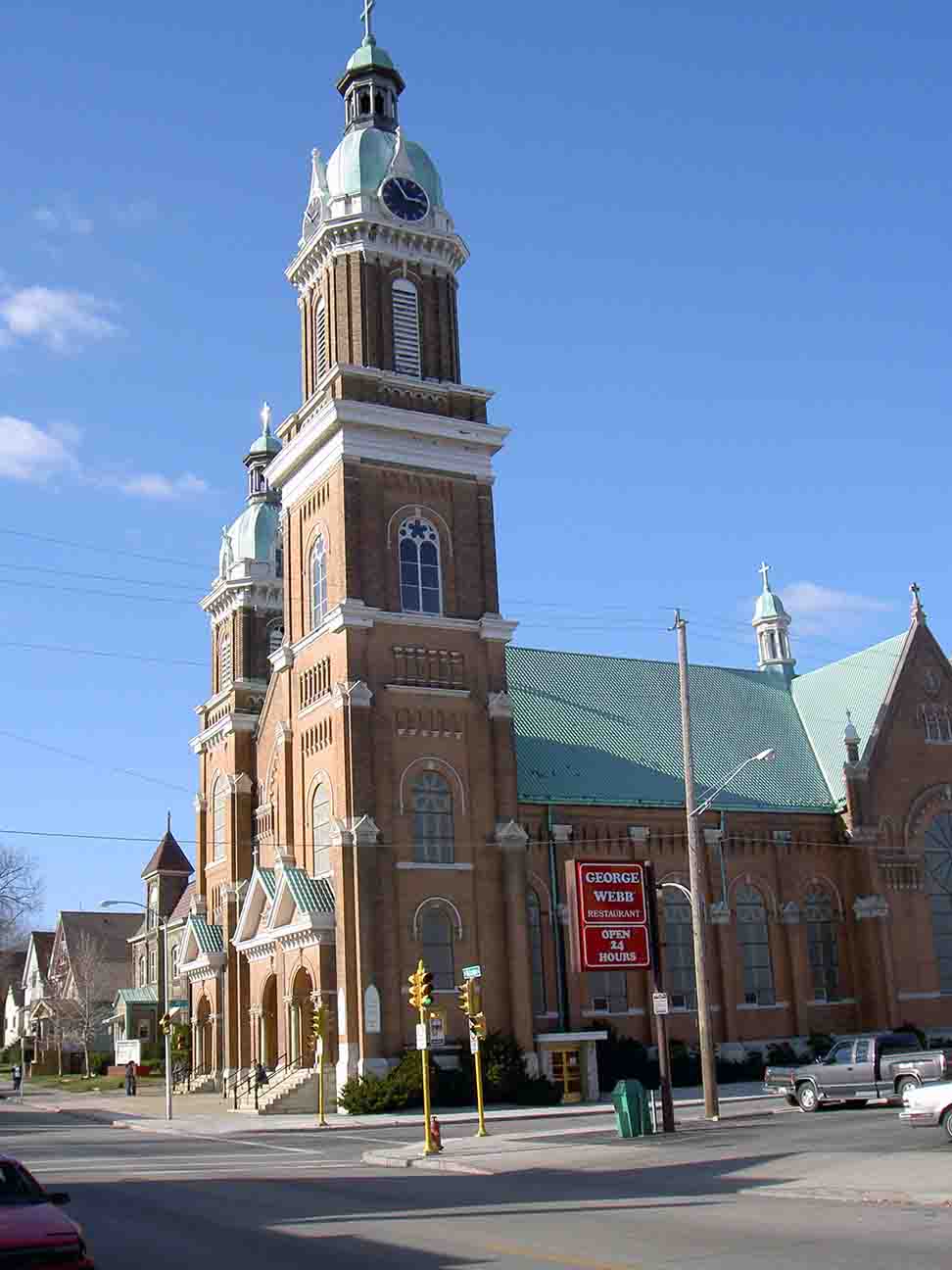 In just a few short years, the south side congregations at St. Stanislaus and St. Hyacinth could not accommodate the growing number of Polish Catholics seeking to worship. Father Gulski decided to divide his St. Hyacinth parish and began efforts to organize a fourth Polish parish in Milwaukee.