The Polish Hero of Texas

The history of Texas dates back to the second decade of the sixteenth century, when the Spanish explorer and cartographer Alonzo Álvarez de Pineda landed on the coast of the Gulf of Mexico, mapped the coast, and in 1519 declared the area Spanish property. The areas he discovered were inhabited by various Indian tribes, including the Coddo and Karankawa, which were later joined by Apache and Comanche, who were displaced from the North. To this day, linguists have not determined where the name Texas comes from. Successive Spanish and French expeditions to the area called Texas, were organized by "treasure hunters" and missionaries bringing Christianity to the inhabitants of the newly discovered lands. In the 18th century, the Spaniards founded over 30 Catholic missions and settlements, incl. San Antonio, Alamo, Goliad, San Jose. The owners of what we now call Texas kept changing. They were, in succession, French, Spanissh, Mexican Spanish, and Mexican.

In 1821, Mexico freed itself from Spanish rule and created an independent state. It considered the land that stretched east of the Rio Grande River as its own. After Louisiana was bought from the French, Texas directly bordered the new country, the United States. Thanks to the favorable settlement conditions offered by the Spanish government, organized groups of settlers moved westward, inhabiting the areas of today's Texas and neighboring states.

Stephen Austin, known as the "father of Texas", played a great role in organizing the settlement in Texas. Since the land here was several times cheaper than in the already organized States of America, masses of settlers went to Texas for the "Golden Fleece". In the third decade of the nineteenth century, Anglo-American settlements on the eastern side of the Rio Grande already numbered about 20,000 settlers. Economic ties between the States of America and Texas were ever closer and threatened Mexican domination.

Soon Anglo-Americans and European settlers constituted such a large community that they began to stand up for their rights. In 1830, the Mexican government, fearing the loss of influence in this wealthy province, banned Americans and Europeans from settling in Texas, triggering the beginning of separatist movements. Negotiations with the Mexican government initiated by the Texans did not bring any beneficial solutions. The arrest of the negotiator Stephen Augustin can be considered the beginning of the Texas Revolution, i.e. the struggle for independence. The Texas Declaration of Independence was passed on March 2, 1835.

At a time when Texas fought for its independence, the Poles on November 29, 1830, started an uprising and for a year, until October 1831, they fought with Russia for their independence. After the defeat, some units of the insurgent troops withdrew to Austria. After the intercession of many influential people, the Austrian government in 1834 deported 235 officers and soldiers, former participants of the November Uprising to America, to New York. Having come to New York, the Polish insurgents held various jobs to support themselves. Many of them were veterans of the Napoleonic Wars, battle-hardened and seasoned soldiers. When they found out that the Texans were fighting for their independence, they enlisted in the army. They could then do what they were trained to do, serve others with their experience, and fight for freedom. Recruiting in New York was conducted by various officers and civilians. When the recruitment to the army began, which was to support the Texan settlers striving for independence, 48 Polish volunteers, former November insurgents, enlisted in various units. Overall, 47 former insurgents took part in the struggles for the independence of the Republic of Texas, including 43 in Sam Houston's army. Among them, lieutenant Feliks Andrzej Wardziński, lieutenant Napoleon Dembiński, brothers Franciszek and Adolf Pietrasiewicze, lieutenant Feliks Kartuski, width Teodor Piotrowicz, non-commissioned officer Józef Skrzyński, and many others. All of them entered into the history of the Republic of Texas distinction. Seven of them died as heroes of the battles for the Alamo and Goliath forts. Lieutenant Feliks Andrzej Wardziński was victorious, survived and served Texas for the rest of his life. 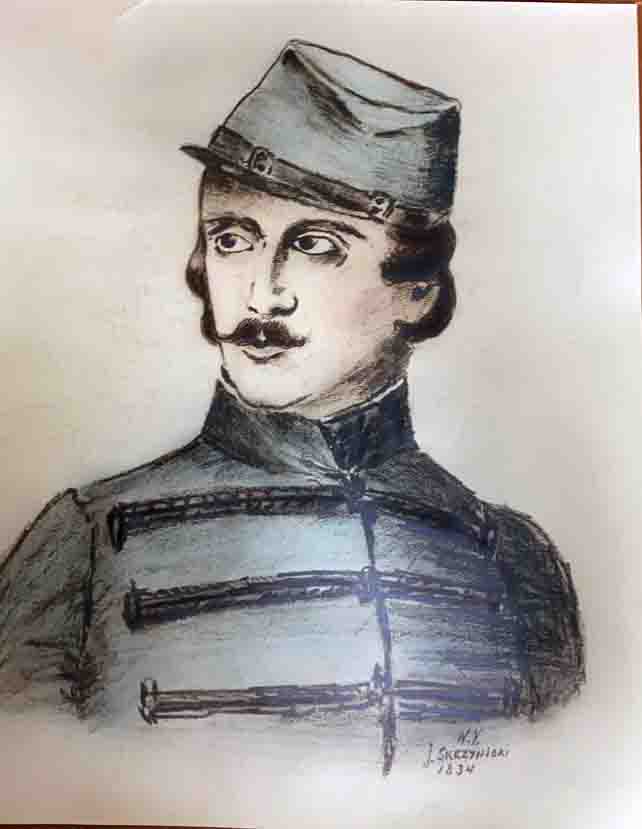 Feliks Andrzej Wardziński was born in 1801 in Poland. In the rank of lieutenant, he served in the Fourth Infantry Regiment in Warsaw, which was enjoying the best fame in the Polish army. He was privy to the cadets' plans regarding the outbreak of the uprising. On the November night, he and his company acquired a weapons depot — the Arsenal. After the defeat of the uprising, he was among the outlaws deported to Austria. The exiles in various ways reached the Texan settlers, rebellious against the Mexican government, who rallied and prepared to attack the Mexican forts. Their independence efforts were supported by the American General Sam Houston who arrived in December 1832.

The then dictator of Mexico, General Antonio López de Santa Anna, could not and did not want to allow the separation of Texas from Mexico. After the first lost skirmishes with the rebels of General de Cosa, he himself headed the 6,000-strong army, with which he set off through the desert to deal with the rebels. The first to resist his army was the Alamo fort. The siege began on February 23, 1836 and lasted thirteen days. Legend has it that the fort commander Travis, aware of the hopeless situation, suggested that anyone who wanted to leave the fort could do so. He drew a line in the sand, voluntarily crossing of which constituted a decision to fight to the death. The only one who refused to fight was the Frenchman Louis Rose. The stance of the fort's defenders can be compared to the fight of three hundred Spartans against the Persians at Thermopylae. The crew decided to fight to the end. They were all volunteers and all (183) died.

Among them were three heroic Poles. After this victory, the Mexican army fought several skirmishes, and the captured soldiers were placed in the Goliad fortress. Despite earlier agreements and promises that the prisoners would be released, on the morning of March 27, 1836, all prisoners were led out to the courtyard and killed. Among the murdered were at least three Poles: Major Michał Dębicki, Jan Karnicki, Józef Skrzyński. Earlier, the artillery commander, Adolf Pietrusiński, had fallen. These facts must be verified by further research, though.

The defeats of the Alamo and Goliad and the cruelty of the Mexican soldiers made Santa Anna convinced of the weakness of the Texans, but Sam Houston, who took command of the defending army, was closer to settling the result of the war than it looked. He avoided a decisive clash, dodged, but during this time he enlarged and disciplined his army, which was made up of volunteers of various nationalities, fortune hunters, adventurers and idealists. One of the idealists volunteers was Lieutenant Feliks Andrzej Wardziński. Although he volunteered as a private, his talent and commitment quickly attracted the attention of commanders who entrusted him with more and more responsible tasks.

On April 19, 1836, General Houston gave a passionate speech to the soldiers about the necessity of fighting and even sacrificing their life. He ended it with words. "Soldiers, remember Alamo, Alamo..." The soldiers added "Goliad!" Feliks Wardziński had special reasons to avenge the tragedy of both forts. His comrades from the November Uprising and exiles to America died there.

The Battle of San Jacinto

The area where the decisive battle took place was small. It occupied about three square miles of land, the shape of a irregular triangle leaning against the San Jacinto River and a wetland plain. General Houston felt he should prepare to defend himself and wait for Santa Anna to attack. Santa Anna thought so too.

The actions of Lieutenant Wardziński largely determined the course and victory of this battle. After analyzing the intelligence reports and the topography of the area, General Houston ordered the destruction of the only bridge through which anyone could withdraw from the battlefield. The Mexicans didn't know it, and the Texans didn't assume they would run away. The battle was to be "to the end". The bridge was destroyed by a group under the command of Lieutenant Wardziński.

General Santa Anna did not expect the battle to take place that day. He ordered the soldiers to go to siesta and himself fell asleep in his tent. The attack came while the Mexicans were resting, preparing their meal. It completely surprised them. The Texans shouted "we remember Alamo, we remember Goliad...!". The forces were fairly even, but the Texans had the upper hand by way of surprise. General Houston led the charge personally. He lost his horse twice, he was injured in the leg, but his goal was to reach Santa Anna's tent and capture him.

When Santa Anna realized there was no turning back, because the bridge had been destroyed, he kicked off his uniform and, in civilian clothes, began to wander the prairie. On April 22, Wardziński's unit searched the area and then the lieutenant spotted the suspicious individual, took him prisoner and delivered him to the camp of general Houston. It turned out that the disguised prisoner was the president himself and the commander-in-chief of the Mexican army, General Santa Anna.

On May 14, 1836, Santa Anna, as president of Mexico, signed a truce and guaranteed the independence of the Republic of Texas. The Rio Grande River was supposed to be the border between the two countries. The young republic faced many challenges. It had a population of 52,000, of which only 30,000 were Anglo-American.

Feliks Wardziński was released from the army on August 5, 1837. He received 320 acres of land for his service. Injured and sick, he began farming in Harris County. In 1845, however, when the United States was again at war with Mexico over Texas, he rejoined the US military and fought for Texas' freedom until the end of the war, until February 2, 1848. After the war ended, he returned to his farm and worked on it until his death.

In 1936, on the 100th anniversary of the Texas Declaration of Independence, the January 1936 Texas Centennial Exposition Bulletin stated: "In the Hall of Heroes of this Texas Hall of State, at the opening of the Centennial Exposition in Dallas on June 6, Felix Wardziński's name will be inscribed along with with the name of Sam Houston, the liberator, and Stephen F. Austin, the colonizer and father of the Lone Star Empire. "

The honor of the hero from San Jacinto having been recognized can only be compared to that of Tadeusz Kościuszko and Kazimierz Pulaski in the United States.

The project is partly financed by the Chancellery of the Prime Minister as part of the "Polonia and Poles Abroad 2021" competition. The publication only expresses the views of the author(s) and cannot be equated with the official position of the Chancellery of the Prime Minister.
Polish Texans: the History of Texas Polonia
Prof. Jim Mazurkiewicz's Lecture Notes
Andrzej (Andrew) Woźniewicz 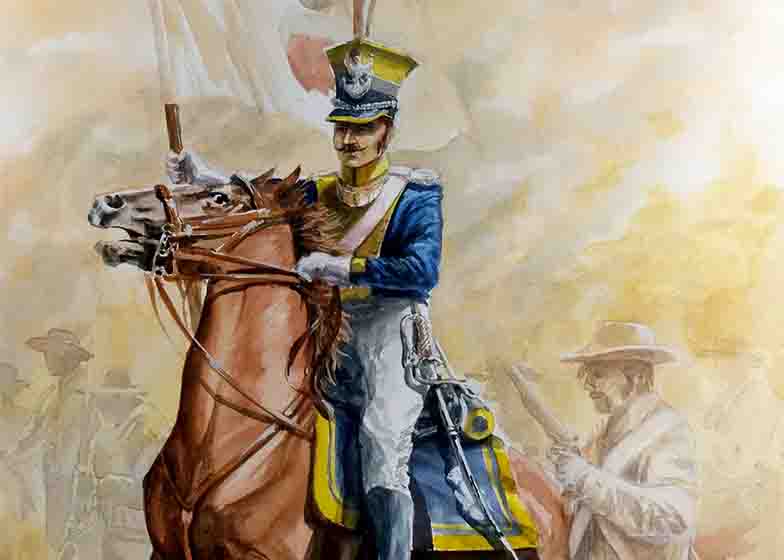